I swing my axe over the corniced lip of the headwall to find nothing but sugary snow.  I am tired; everything hurts, my legs burn, the tendons in my elbows are screaming at me to make it stop.  After a 50m pitch up snow and ice, then a final climb up the snowy last pitch, this would be a bad place to fall.  As much as I am physically tired, mentally I am done.  Wherever my comfort zone was before, I am way outside of it now.  My left foot gives way as I plunge an axe into the soft sun kissed snow.  This is a bad place to fall.

We have come to the Cairngorms to climb, the lure of the white lines that creep up the crags and gullies calling to us from across the border, the last bastion of winter.  Having thought the season over as we retreated from the Lakes weeks earlier, my mind has relaxed into an easy calm about this trip.  Somehow it seems to forget the fear, like the body forgets pain.  It doesn’t return until we are stood beneath the headwall, staring up at the imposing glacial fortress that looked so easy from the comfort of the guidebook.

We tool up at the bottom of the crag, strapping on crampons and racking gear on our harnesses.  Our chosen lines a mix of steep snow and ice that lead over 100m straight up.  At the top we will be higher than any point in our native England.  I begin my mental preparations.  Take the fear, put it in a box.  Lock the box.  Put the box away.  This is my first season climbing mountains in the winter, the delicate psychological war that rages inside me on every climb tips in nature’s favour.  The box is heavy today.

Climbing as a three proves more difficult than we had imagined.  On one route, the spare rope begins to untie from my back.  Every time I move it swings round further, coils of rope threatening to tangle my feet, obscuring my view and getting caught on the knife edge spikes of my crampons.  Stood on the front two points, there is little I can do from here.  I can feel the box straining to keep the fear contained, but the only way out is to push through.  Using all my concentration to focus on the act of moving up, I push the box back in its place, holding down the lid long enough to get to safer ground and a short rest. 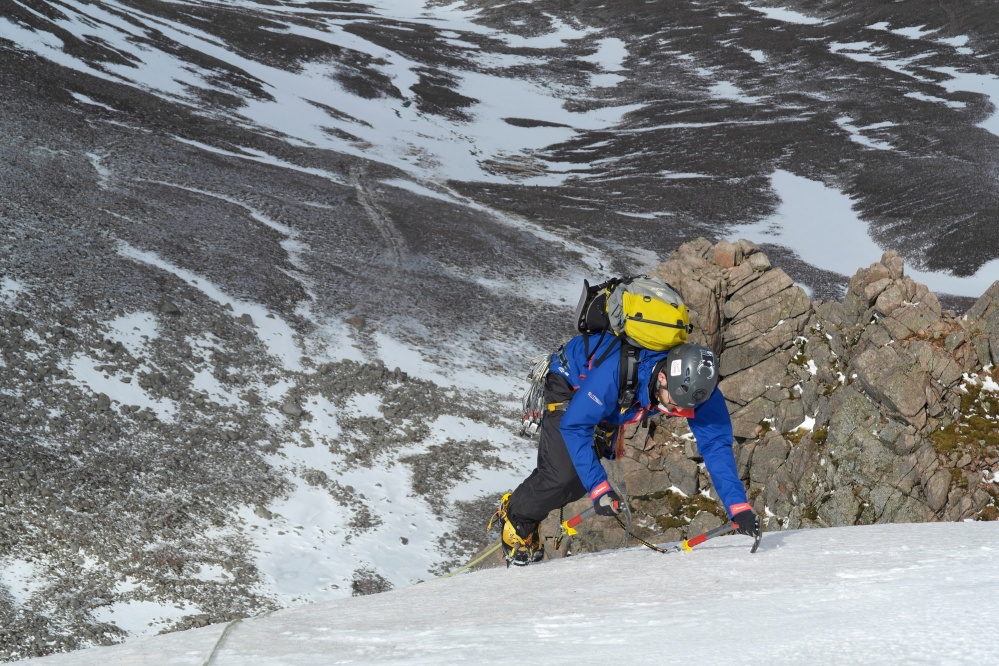 Hours pass on the mountain.  The battle rages on, each inch we climb higher adding weight to the box, putting strain on the locks that keep it closed.  We are now 100m up the final route of the day,  out of rope and running out of time.  After some discussions, the plan is formed.  I will climb up to the belay, and carry on to the top, to set up a final stance, the safe anchor that makes sure we all get off the mountain.  The box creaks and groans with the strain, my mind, like my body, fatigued from the previous eight hours of physical effort.  One more pitch.

Setting off the pain sets in imediately.  As I kick and hack up the slope, I feel my energy drain, my mouth is dry and everything aches.  I should be stronger, fitter, but there is no more time now.  The only way out is up.  Taking out the gear as I move, my gloved hands fumble clipping an ice screw onto my harness.  At last it clips and I set off again swinging axes into the icy back wall of a narrow chimney that leads to safety high above.  Every swing feels like somebody driving knives into the tendons in my elbows and knees.  I am dehydrated, tired, on my limit.  Right at the edge of what I know I can do.  The only way out is up.

50m became 30m, 30 becomes 10 and then I can see the belay.  I force my body up, heaving on axes and pushing up on the tiny spikes strapped to my boots.  I move fast, using the last of my energy to break free of the chimney, but it isn’t over yet.  As I reach Matt, a voice on the radio interrupts my laboured breathing:

“lucky it landed next to me”.

I look down at my harness and realise I dropped the screw.  In my battle to keep moving up I had blocked out the radio, and missed the fact I had dropped such vital gear.  I am fixated on my mistake.  A tiny lapse of concentration.  The box is opened.  Stood on a hastily kicked step, I can feel it hit me like a tsunami.  The fear is out, running rampage in my head.  There is no stopping it now.  I can feel my leg starting to shake, over-tensed fatigued muscles spasming – the disco leg.  I try and replant my foot, calm my heavy breathing.  The only way out is up.  One more pitch.

With everything on fire, I push up on shaky legs, plunging my axes as deep as they will go, scrapping with the mountain as I head for the thin band of gold that spills over the corniced edge.  There will be no places to clip the rope, no protection for this last push.  It’s all or nothing.  This isn’t a graceful dance.  I am boxing now, a no holds barred street fight.  I punch a path up the mountain, slamming the picks of my axes into its silvery side, kicking a path straight up to safety.  Every step hurts, each breath never big enough to feed my oxygen starved muscles.  I reach the lip and see the light painted bright on the summit plateau.  One more metre and I will be safe, the hurting will stop.  I peer over the edge and swing an axe.  It hits with a soft thunk and sinks deep into the snow.  I weight it but the sharp edge pulls straight back through the powder.  I am trapped on the edge.  The ebb and flow of the battle in my mind is firmly against me.  The mistake with the ice screw still loud in my head, my tired body still refusing to believe I can do this.  It is the last stand, my Alamo. This is a bad place to fall.

I take a deep breath and kick up with my feet, I gain 6 inches, enough to get an arm over the edge.  I plunge my axe as deep as I can, hoping it will hold.  Daring to look up I am fixated on the band of rocks that will make the final stance, the low winter sun throwing waves of light that dance across the plateau.  I am enchanted by the raw beauty of it all.  Nobody will ever see that place as I saw it in those two seconds.  The spell is broken as my foot gives way.  I slam my other axe into the snow, without thinking transfer weight across to my other foot, and push up.  Another axe swing, a last kick into the mountain.  My front points sink deep and I drive up, I can taste the relief, the safety.  Somewhere in the noise I remember it being poor form to belly flop over the edge, and despite everything will my body one step higher to step up fully onto the edge.  I am up.  Two steps more and I am safe.  Radio Matt.  Call down “Safe”. I am working on auto-pilot.  Two more steps, the rope is heavy as I pull it up over the edge, staggering up against its weight as it pulls me back to the abyss.

There is nobody else up here, and I sink to my knees and rest my head on the frozen ground.  I am at the top.  The fear retreats slowly, skulking back to the shadows.  I have won this time.  My limits inched further out.  I pack the box away and sense that it’s a little bigger now.